Last week was a busy week for those of us in the Asia Health Informatics Industry … yes I am referring to HIMSS AsiaPac15, which I’m going to provide a very brief update (from my own personal experiences).

I have mentioned this several times but HIMSS AsiaPac serves as an excellent platform to catch-up with friends and this year is of no exception. In addition to the pleasure of catching up with so many familiar faces from all over the world, I also made several new ones. This aspect alone makes it worthwhile for one to attend HIMSS AsiaPac (For the interested, HIMSS AsiaPac16 would be held in Bangkok in August 2016).

As mentioned in a previous post, I performed a few official duties, including serving on the Organizing Sub-Committees of both the “Smart Data and Exchange Track” and “Smart Home and Consumer Track” as well as Moderator for the  SMART DATA & EXCHANGE, on 9 September (Wednesday). What I did not mention (because I meant it to be a surprise for friends attending the event) was the HIMSS Fellow Recognition scheduled on 7 September (Monday) where I was officially honored as the First HIMSS Fellow in Asia, officially receiving my certificate on stage, from Dr. Chong Yoke Sin, Chairperson of HIMSS Asia Pacific Governing Council (I’ll post the official photo once it’s available).

With reference to the exhibition, there were many ‘new participants’ showcasing their wares to the attendees. One interesting trend I noticed was the surge of vendors offering VNA solutions. (I presented on the topic at HIMSS AsiaPac12 as well as at several other conferences in 2011, not to mentioned the book I wrote on this topic, also in 2011). There are of course, many other interesting observations from the exhibition hall but I’ll leave the details out in the spirit of maintaining vendor neutrality.

The last bit of information that I think is worth sharing would be the FHIR Masterclass that HL7 Singapore co-organised with HIMSS AsiaPac. The FHIR Masterclass had participants not only from Singapore, there were also several other HL7 Affiliate Chairs, Co-Chairs, FHL7 and people from all around Asia and Middle East attending Grahame Grieve’s sharing! It was truly a wonderful session and I look forward to organizing follow-up training sessions pertaining to FHIR! 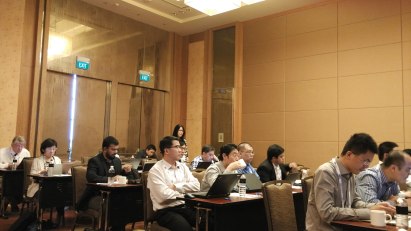 Health Informatician
View all posts by Adam Chee →
This entry was posted in !Updates & Ramblings. Bookmark the permalink.